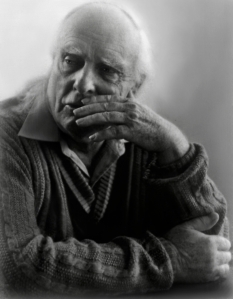 Herbert Paul Grice was born on 15th March 1913 in Harborne, Birmingham. During his lifetime and in the years since his death in 1988 he has had a profound effect on how we understand the nature of meaning and the relationships between language and context. In 2001 Peter Strawson and David Wiggins offered the following assessment of Grice’s philosophical legacy:

“Other anglophone philosophers born, like him, in the twentieth century may well have had greater influence and done a larger quantity of work of enduring significance. Few have had the same gift for hitting on ideas that have in their intended uses the appearance of inevitability. None have been cleverer, or shown more ingenuity and persistence in the further developments of such ideas.”

Independent film makers Simply Charly have produced ‘Russell: Analyzing Language‘, which is well worth watching. The two-part film features Stephen Neale talking about Russell’s 1905 paper ‘On Denoting’ and its philosophical implications. The discussion is wide-ranging, and has much to say about developments in analytic philosophy over the last century. I particularly enjoyed the anecdote about Grice, who apparently commented that Strawson’s 1950 response to Russell, ‘On Referring’, was ‘a wonderful paper marred only by a completely unnecessary discussion of Russell’s theory of descriptions’. Neale even includes some tips on how to teach Russell’s theory humanely. 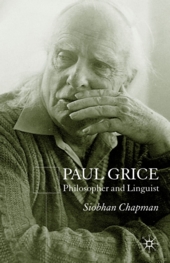 My book Paul Grice, Philosopher and Linguist, first published in 2005, is now available in paperback.

Following on my last post about this, the paperback version of my book on Paul Grice has now appeared on the Palgrave website; it’s available to pre-order and will be published in June 2008.

Here’s the link to the page.

I have just heard from Palgrave Macmillan that they are going ahead with the publication of a paperback version of my book Paul Grice, Philosopher and Linguist. This is going into production later this month, and should be out in the early part of 2008.

I have just been reading Bethan Davies’s article ‘Grice’s cooperative principle: meaning and rationality’ in the current issue of the the Journal of Pragmatics. Davies argues for the need to read Grice’s work on cooperation in the context of his philosophy as a whole. In particular, she suggests that such a reading might provide a check on what she aptly calls ‘cooperation drift’, by which Grice’s very specific and technical notion tends to merge in discussions by linguists into the more general notion of ‘cooperation’ as an admirable form of human behaviour.

I argue in my book Paul Grice, Philosopher and Linguist that Grice’s few well-known articles can fully be understood only in relation to his work as a whole, and it’s good to see this particular demonstration of that claim.

Here is a link to Davies’s article, although you’ll need a ScienceDirect login to access it in full.

Last week I was at the LAGB conference at King’s College, London, where I heard some very interesting papers and discussions. My paper was called ‘Empirical semantics: the case of “or”‘. In this, I used two separate accounts of ‘or’ from the 1960s, Grice’s famous treatment of generalised conversational implicatures in his lectures on ‘Logic and Conversation’, and an empirical study by Arne Naess, as a way of comparing the assumptions and methodologies of ordinary language philosophy with those of Naess’s empirical semantics. Linguists are becoming increasingly interested in questions of methodology and of data and, as I argued in my paper, some of the things being said in present-day linguistics are remarkably similar to the views expressed in Naess’s little-known philosophy of language.

The most recent edition of Teorema celebrates the fiftieth anniversary this year of the publication of the hugely important paper ‘Meaning’ by Paul Grice. I have contributed an article, ‘”Meaning”: Philosophical Forebears and Linguistic Descendants’, in which I trace some of the influences on Grice’s thinking and also consider how these influences, via Grice’s work, have fed into linguistics.

I’ve recently submitted an article with the above title to appear in Meaning and Analysis: themes from H. Paul Grice, a new collection of essays on Grice’s work being edited by Klaus Petrus.

Klaus is a Director of a research group at the University of Berne that is currently running a number of projects based on Grice’s work.